SpaceTime Helix is a kinetic light and sound sculpture. It is a play with light, helical symmetries, geometry and infinity. Its sonic and light properties have been optimized so it can be played as an optic/acoustic instrument in performance and concerts, creating an immersive experience of space, light and sounds. The Helix is a spinning standing wave in a white rubber string, forming a large helicoid up to the roof. The installation creates a superposition of harmonic oscillations in a string.The helix surface is bright transparent, with colors and waves running over it. The performance is a play with live sculpture and sound.

SpaceTime Helix was created in 2012 by Michela Pelusio and improved and changed over time through collaboration with creative people. Special thanks to the hacker space ToLabaki in Crete, at Schmiede Playground of idea 2012/13/14 in Austria, Stratos Bichakis in Athens and Mika Satomi in Berlin.

SpaceTime Helix was exhibited in Germany at Max Planck Institute of Astrophysics, in Vienna at the Museum Quartier, in Hallein at Schmiede 2012/13/14, at the Cretaquarium of Heraklion and at the Natural History Museum of Crete, at the Castle of Zynkovy arts festival in Czech Republic, at the Guido Van Rats Gallery in Vienna, at the MetaLab in Vienna, at Cinestudio Live in Heraklion, at Fasma festival 2015 and at BIOS in Athens. 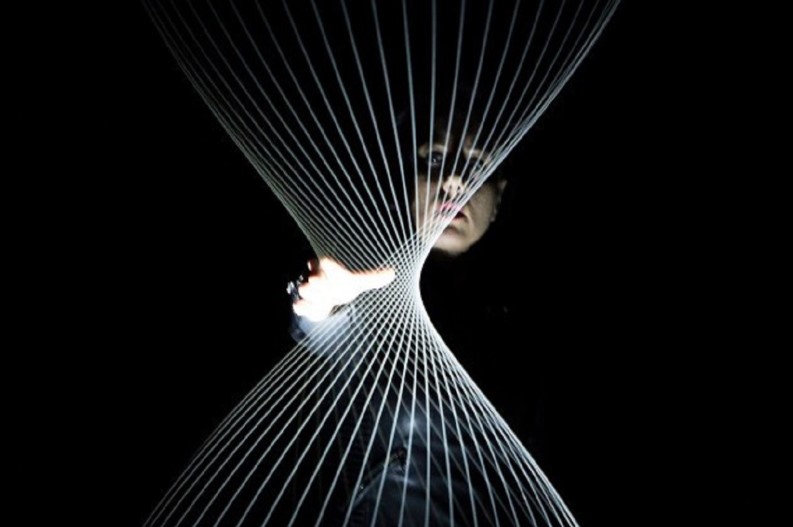