Born in Philadelphia, Pennsylvania, the year the Phillies won the World Series, Rebecca Whipple decided at the age of 21 that she wanted to be an Artist with a capital A. Along the way she explored the possibilities of engaging in more lucrative alternatives; among the candidates were Architecture, Art History, Web Design and eventually 3D Computer Animation. Enrolling in a 3D animation class at her alma mater, New York University, she succeeded in making, in her view, the most boring animation of the class (though, I may say, elegantly done). Having discovered her clear misunderstanding of the nature of movement she pushed forward with her real love, painting. After years of hard work, experimentation, and an MFA in painting from The San Francisco Art Institute under her belt, Whipple had an idea which required her to delve back into the sticky, fearful but exciting world of animation. She wanted to recreate a dream, and this couldnt be done without movement. After a few small experiments she launched into a yearlong project to create Steve Martin on the Loose, her first film. Combining her painting talent with her at the time rusty, but functioning, computer skills, she developed a process split between hand and computer. Having her cake and eating it too, she now straddles the borders between new and old, fast and slow, handcraft and technology. 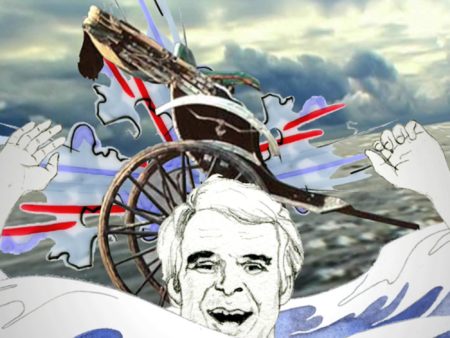 Steve Martin On The Loose