Evi Tzortzi graduated with honors from the State Drama School of Northern Greece in Thessaloniki. Further studies in acting, dancing and singing in New York. She is involved with theater, singing and dancing,especially Butoh dancing,and in the past few years has danced in several Butoh performances along with respectable dancers of this genre,such as Masaki Iwana,Yumiko Yoshioka and Atsushi Tacenouchi. The video dance art “antanaclasis” is her recent work that has been presented at the contACT art Festival,Thessaloniki,September 2010,at Athens Video Dance Project 2011 and will be presented as an official selection at the International Video Dance Festival of Burgundy in May 2012.”Antanaclasis” has been also transformed into a live performance for Thessaloniki Performance Festival,parallel program of “biennalle:3,Thessaloniki Biennale of Contemporary Art”,September 2011.The same video is the keystone of the dance theater performance “m.e.t.a.” that Evi Tzotzi created in collaboration with the choreographer Stefanie Tsakona and has been presented at the ReMap 3 Festival,Athens,October 2011,at the Athens Video Dance Project 2011,November 2011 and in the city of Patras,February 2012. 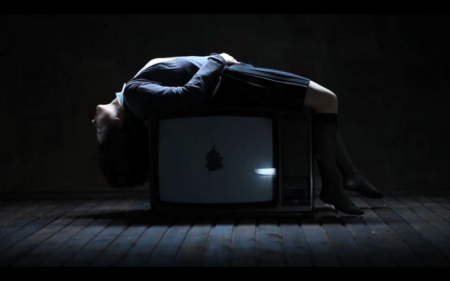