A live soundtrack is played by placing and moving small objects on the surface of the Reactable, a tangible interface that creates generative music. These objects have special markings which the table reads, and interprets musically in relation to their orientation and location- necessitating new juggling techniques to control their behavior. Work with the Reactable initially started with JAM (Juggling and Music), the first masters degree course offered by a circus university.

A major ingredient in the music are sound samples taken from behind the scenes transmissions of the Apollo era space program. Many of the recordings were first sent from the surface of the Moon, suggesting a certain technologic mastery. The contrast between these low quality recordings, and the cutting edge technology they are now played with is also found in the construction of the Reactable itself- seemingly futuristic and yet pieced together by hand, not yet mass produced or proven. Similarly, even though the Reactable object tabletop designs are new, their handmade construction mirrors the process of jugglers from 100 years ago, when jugglers could not just order the same limited choices off the Internet. All of the materials in this show remain prototypes, and by their nature embody exploration. 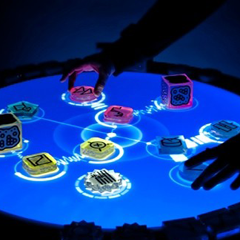