Inferno is a robotic performance project inspired by the representation of the different levels of hell as they are described in Dante’s Inferno or Haw Par Villa’s Ten Courts of Hell and other religious representations. Here, the “circles of hell” concept is mainly an artistic framework, a general working theme under which the different parts of the performance are regrouped. The specificity of this participative performance piece resides in the fact that the different machines involved in the show are installed on the viewers’ body. The public then becomes an active part of the performance. Sometimes the viewers are free to move, sometimes they are in a partial or entire submission position, forced by the machines to act/react in a certain way. Some mechanical elements coerce the viewers in performing certain movements, others induce a physical reaction from them. The viewer’s experience happens at multiple levels, but it is highly perceptual, as most of his senses are called upon. The unification of man and machine is, in a certain way, an expression of the punishment for the technological sins committed for the sake of progress. The more we blend with technology, the more it drives us through the inner circles of a state of loss. We use this theme to build the aesthetic concept of the work. Moreover, wearing or being entrapped into a robotic entity recalls the concept of the Cyborg that emerged in the late 80ʼs. Inferno revisits this idea thru a pastiche of the utopian concept of Singularity and subordination to the machine. 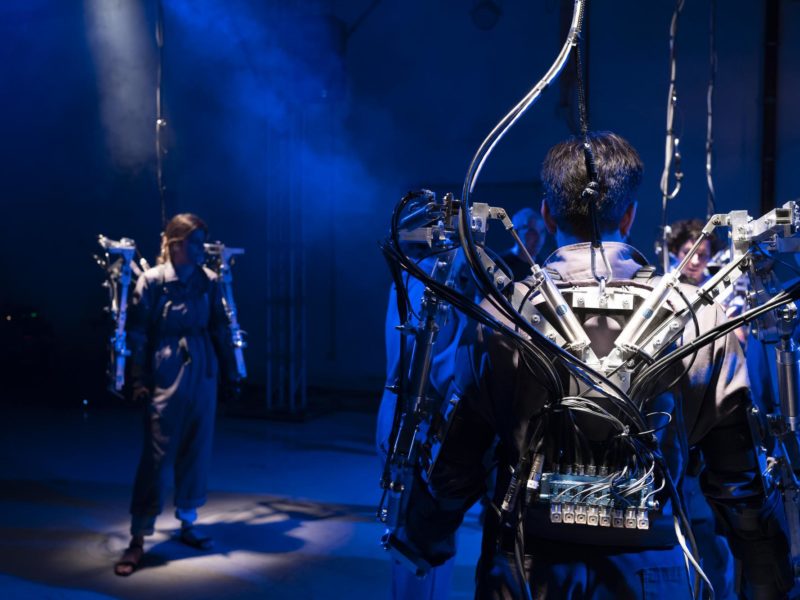