In his book “Understanding Media: The Extensions of Man” Marshall McLuhan suggests, like the mythic Narcissus, we’ve become numbed by our reflected image. The replicated (digital) image takes on its own signification reminding us of the fabrication of identity and our ability to digitally alter our appearance and personal narrative. We live in the age of the repeated and fragmented. We gaze at our Other selves with the same starry eyed hypnosis Narcissus experienced when consumed by his own reflection. This Other has a life of its own, its own identity, function and destiny.

“iLook” explores this notion of looking and psycho-feedback through a series of visual collages. The video moves slowly allowing the viewer to look, linger and watch. The image of the artist distorts and multiplies creating an imaginative space where copies of copies mingle and coexist. Image fragments multiply and join creating new forms and curiosities. Imagery shifts from sensual to abject evoking the scopophilic, and allowing the viewer to luxuriate in the act of looking with the added dimension of being conscious of their voyeurism. 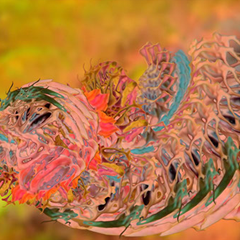