Allan and Alice, played by two black-and-white TVs, talk about the existence of a chatbot and their many everyday problems that come with it.
Hilarious dialogue with ALICE is a dialogue sequence of two chatbots, computer programs which are programmed for a written conversation with actual people. In this particular case, two of these chat programs are interconnected, thus a dialogue between two computers, which are programmed to communicate with people, was created.
The uptake and independent of action of these programs are still quite limited, as situations arise from misunderstanding and confusion between two binary machines, which have actually been communicating with each other for decades.
Hilarious dialogue with ALICE transformed such a dialogue between two chat programs. It is run by computer conversations which are dubbed by people, but you only see the respective mouth, gestures and facial expressions are as good as nonexistent, they show as little emotion as a computer would.
Directly confronted, these two mouths flicker on two portable televisions, one telly screen against the other. There is just enough room for a quick view from the side, but the feeling of having seen only a side issue of the smallest part of a larger whole still remains. 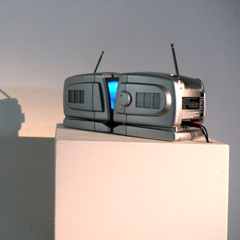