In this video art by Shahar Marcus two figures play chess with large chessmen made of ice. The passage of time is marked by the melting of the ice and the movement of the huge hourglass filled with Styrofoam balls that revolve with every move of the game. Inside the hourglass the artist stands like Chronos, the Greek god of time. The rotation of the hourglass, the melting chess pieces, and the alternation of black and white stand out in the location in which the scene was filmed: the plaza outside the Shrine of the Book at the Israel Museum. This building houses the Dead Sea Scrolls, including the famous War Scroll, which describes the apocalyptic battle between the Sons of Light and the Sons of Darkness, when the familiar passage of time will give way to the timescale of myth. 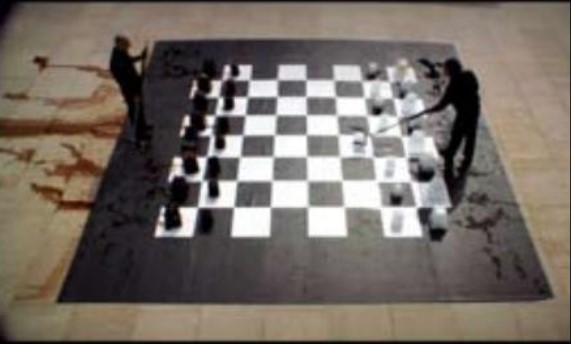