As a Taiwanese independent filmmaker with advanced training in ink painting and digital art, Ying-Fang Shen’s work reflects experiments in painting, illustration, digital filmmaking and animation that are heavily influenced by the handmade aesthetics of traditional East Asian art and Taoist philosophy.
She practices digital art with the sensibility of an illustrator and painter, in that the outcome of her work is always a series of marks of expression developed through a process of seeking originality and playfulness. In many of her animations, she overlies various textures and drawn elements to create works that reflect the spirit of Asian shadow puppetry.
Taoism inspires her approach to storytelling, which results in non-conventional narrative structure with loose plots and a vague sense of time in her fictional, plot-driven works. This philosophy also encourages her to work intuitively in the production of some projects by letting the process inspire their direction rather than a pre-determined script, with the effect that events become like waves carried on water in these stories. Her experiments in form, narrative, and production have resulted in her recent animated films, “Hearth,” “The Tale of The Day,” and “Humanexus.”
Shen works independently and is always the only animator in her films. She sees herself as an artist using animation as her art form, and sees filmmaking as fine art in the traditional sense. Her animation works have been exhibited in galleries and film festivals worldwide since 2008. 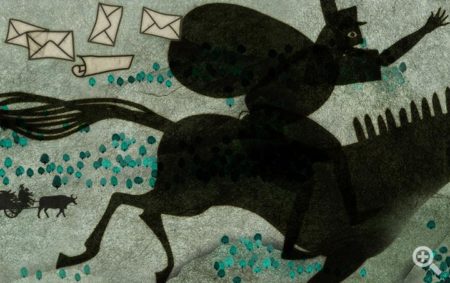