Bundith Phunsombatlert (Bangkok, Thailand) started his art career using printmaking processes in developing three-dimensional objects. He then turned to work with diverse media from handmade printmakings and multiple sculptures to interactive installations where occasional computerized monitorings are used. The concepts behind his artwork deal with observations of social, economic, and political situations in Thailand, which are both different from and related to many happenings in the contemporary world of globalization. He then uses these themes as a form of art in order to gain aesthetic experiences out of learning from the environment. His works often invite the audience to participate so they may directly “feel and experience” his projects. Phunsombatlert earned both his B.F.A. and M.F.A. degrees in graphic arts (printmaking) at Silpakorn University, Bangkok. He is a prolific artist who is considered to be a rising star among the new generation of Thai artists. Among his selected awards and fellowships are Pollock-Krasner Grant in 2001, Second Prize Unesco Digital Art Award 2004, and Asia Cultural Council Fellow 2007. 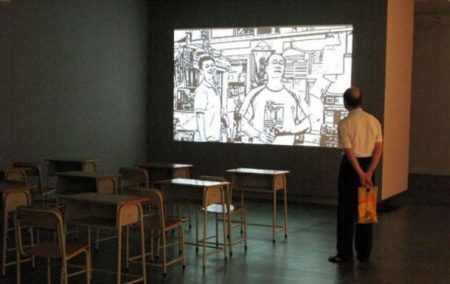 Retelling The Stories From The Past