Born in Berlin 1993 as a son of an architect and a painter. In 1995 his parents went back to Lausanne Switzerland where both come from. After five years the family moved to Zürich.
After Zürich they moved to Fribourg where he continued studying in German. He did his high school in German and French with a specialisation in Art. He came out of high school with a prize for high distinction in arts. He was sure by then that he wanted to study art. He did the preparation class in Luzern at HSLU Design und Art were he discovered Animation. This first experience showed him the brightness of this fascinating tool. In 2014 he started his Bachelor in 2d Animation. He, then left in the fifth semester from Switzerland to go to Tel Aviv for an exchange semester in illustration. This experience was the most interesting time in his life. His Bachelor movie Travelogue Tel Aviv shows his view and his development in this unique place. Travelogue Tel Aviv won the alumni prize of the HSLU Art and Design. 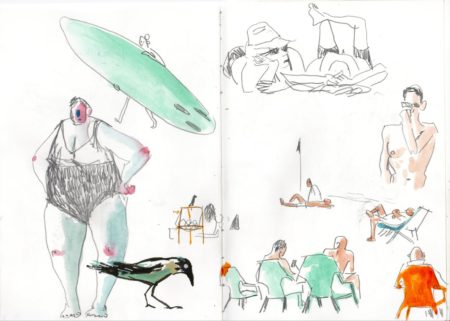