Rodrigo Carvalho (Porto, 1983) is a portuguese multidisciplinary designer & new media artist currently living in Porto. Graduated in Design and with a Digital Arts Master he is nowadays a PhD student in Digital Media in the University of Porto under the UT Austin/Portugal Program. He is very interested in the crossings between arts and technology, and the synergies between sound, movement and image. He is the visual side of the audiovisual real-time performance Boris Chimp 504. Miguel Neto (Lisboa,1979) is a musician, producer and new media artist, has a degree in Psychological Sciences, studied Studio Recording, Advanced Music Production and a Digital Arts Master. Nowadays he is interested in creating musical interactive interfaces and exploring new musical languages, using computers and the new digital technologies. He is the musical side of real-time audiovisual performance Boris Chimp 504. 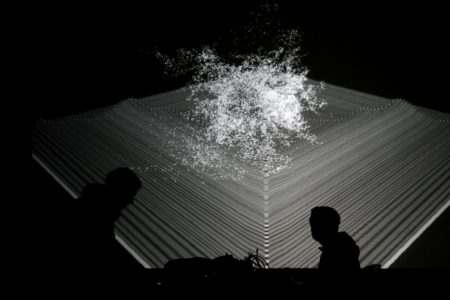