Katerina was born and raised in Athens, Greece and currently lives in London, UK. She studied Painting at the School of Fine Arts of the Aristotle University of Thessaloniki and then completed an Animation MA at the Royal College of Art in London. Her short films, screened at international film festivals and galleries, are a hybrid of live action and animation, forming richly layered worlds with a strong feel for colour and texture. Video, photographs and animation coming together in a process akin to alchemy, embracing chance and experimentation. She works as an Animation Director, collaborates with other artists and companies and teaches in art colleges in the UK. for texture. Her work combines the handmade with the digital and is born out of intense experimentation. Katerina’s films have been screened in International Film Festivals and she collaborates with other directors and artists through animation direction, special effects and project consulting. For Engine Angelic which is her latest work and a commission by Animate Projects on the theme of “Rough Machine”, she considered roughness not only as a physical state, but also in terms of behavior and motivation. So, roughness became cruelty, within the idea of a mother machine that eats its own children, and then gives birth to new ones – that will probably face the same fate. What greater cruelty than infanticide? She found her inspiration in the Gazi district in Athens, an old gasworks area that has been converted into a major exhibition space. The old machinery that still exists on the courtyard became the source of her creation. Without a shotlist or a solid plan in mind, she explored the space, the handlheld camera documenting the long abandoned machines. Starting to work with the video she shot on location, she looked for moments in time that would allow her to build the mechanical dystopia. The process involved digitally cutting out the live action gasworks from the surrounding space and adding cell-like amoeba children and tentacles that grab them. Engine Angelic is an re-interpreted industrial space, born out of experimentation and deep overlaying of video, photographs and cgi elements that form a carnivorous feast. 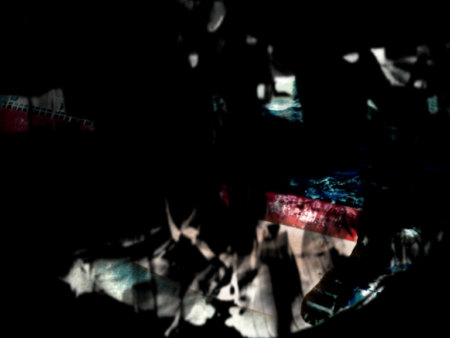 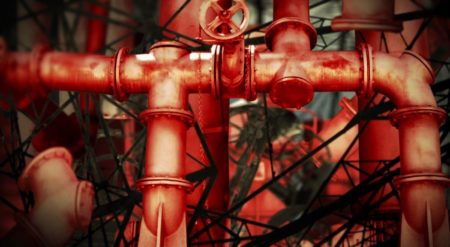