Andreas Pashias sets up video-performances that appear as active agents, connecting or even disrupting diverse points of reference concerning experimental theatrical practices. In setting up performances for a camera, choreographies have been employed upon a basis of rhythmical devices that reference an amalgamated framework of complexities within national traditions. Andreas has graduated from Goldsmiths University of London with a Bachelor of Fine Art & History of Art in 2010 and is now completing his Masters Degree in Performance Design & Practice at Central Saint Martins in London, United Kingdom. Andreas video-performances have been exhibited at the Moscow Biennial of Young Art in 2010, at the Moscow Museum of Modern Art, as also presented in other exhibitions in Norway, United Kingdom and France. His first solo exhibition took place in 2009 under the title “Neokapilos”, within the frame of X-Dream Arts Festival at ARTos Cultural and Research Foundation in Nicosia, Cyprus. In 2011, he joined Christina Georgiou to present a live-performance based and formed around George Maciuna’s fluxus score “Duet for Full Bottle and Wine Glass” at Scarabeo Bar, Nicosia. 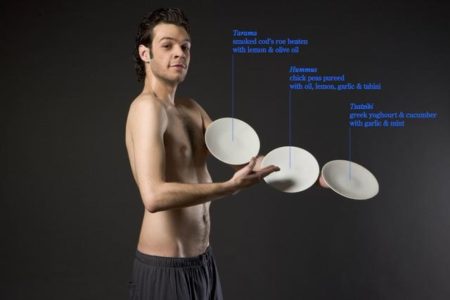 How to be GR