Radamés Ajna is a Liverpool ¬based Brazilian media artist and educator with background in physics, mathematics and computation. He has been using technology as platform of experimentation, using public spaces, human interaction and machines interaction. Has presented and taught in different museums, art centers and festivals, including Tate Liverpool, FILE and MIS in São Paulo, Semibreve Festival in Portugal, Media Art Futures in Spain. In 2015 awarded an AiR residency at Autodesk and was the recipient of a VIDA 15.0 Production Incentive award from Fundación Telefónica. Currently a Researcher Artist in Residence at FACT Liverpool working on educational and learning resources around new media art. Thiago Hersan is a Liverpool-based Brazilian, who used to work improving semiconductor manufacturing technologies. Now, he is more interested in exploring non-traditional uses of technology and their cultural affect. He is part of Astrovandalistas, an art+tech+activism collective based in Mexico City, whose work is primarily focused on designing interfaces for enhancing human-human interaction and collective experiences. Additionally, Thiago has recently worked as a design-engineer at BeatBots in San Francisco, prototyping interactive robotic toys for autism therapy research. He is currently a Researcher in Residence at FACT, in Liverpool, where, along with Radamés Ajna, he is responsible for the implementation of a public space for art and technology experimentation called FACTLab. He has participated in residency programs in diverse spaces like Impakt in Utrecht, The Hacktory in Philadelphia and Telefonica I+D in Barcelona, and in 2013 won a VIDA 15.0 Production Incentive Award. 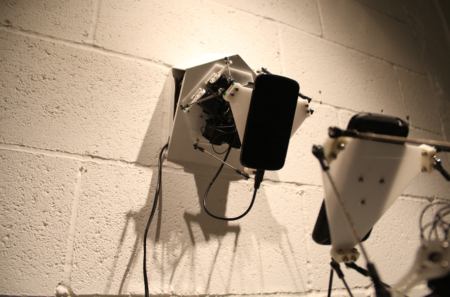